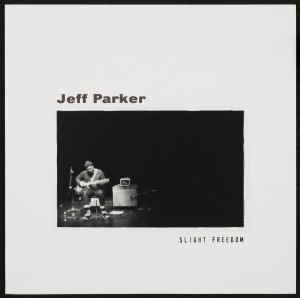 Jeff Parker is an inveterate collaborator who seems to relish opportunities to realize other musicians’ ideas. Consider the guitarist’s work with Rob Mazurek, Makaya McCraven, Fred Anderson, and the instrumental quintet Tortoise; in all of these settings he has found ways to make the ensemble sound bigger and more eventful without demanding the spotlight. So 2016 is a remarkable time for him, since it’s the year that he released two solo albums.

The first, The New Breed, was named after a clothing shop that his dad ran, which says a lot about the priorities and experiences that informed that album. Not only did it feature hip-hop-influenced grooves and compact melodies that Parker could play for the whole family; his daughter Ruby closed the record with a vocal turn. Slight Freedom presents the more adventurous side of Parker’s playing, but it is rooted in the same African-American pop lineage. The title track starts with an echoing figure that is close kin to the O’Jays’ “For The Love Of Money,” only to patiently morph into a liquid ambient reverie; on “Super Rich Kids,” he re-contextualizes a Frank Ocean theme by subverting the original’s airtight production.

On the other side of the LP, Parker uses delays to fashion an elaborate yet uncluttered interpretation of “Mainz,” which was written by former Chicagoan Chad Taylor. The LP closes with a return to aquatic motion in the form of a drifting yet exquisitely constructed rendition of “Lush Life.” Parker dials back both bitterness and sweetness in order to isolate the composition’s implications of memory.