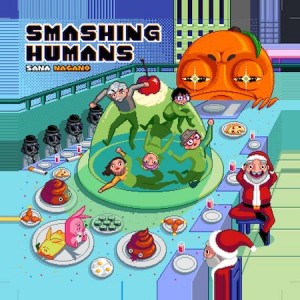 There’s a disquieting, fanciful narrative at the heart of Sana Nagano’s Smashing Humans.

The Brooklyn-based violinist, whose compositions here work to render an aural depiction of the 8-bit, sci-fi tableau shown on the album cover, oversees a quintet that relies as much on jazz-world facility as it does on rock aesthetics. Nagano, while remaining a defining element of the mix, cedes space to guitarist Keisuke Matsuno on the album’s first pair of tracks, the shuffling “Strings & Figures” and the dirge-like “Loud Dinner Wanted.”

Her writing begins to pixelate on the compositions that follow, granting a unique view of other contributors—all caught up in the bandleader’s noisy arrangements. There’s space for drummer Joe Hertenstein to direct the band on “Chance Music,” and Nagano’s violin narrates the tale of “The Orange Monster” being bullied on “Heavenly Evil Devil.”

But interactivity—where veteran saxophonist Peter Apfelbaum makes his most resonant contributions—really propels Smashing Humans and its redemptive storytelling; the repetitive lines that make up the core of “Humans In Grey” create a wash of power not felt elsewhere on the album. And as calamity is avoided in Nagano’s narrative, “The Other Humans” concludes an album that both feels and sounds a bit like Blade Runner looks.