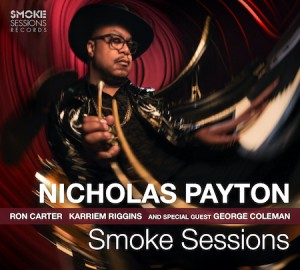 Enraptured by his first encounters with Miles Davis’ 1966 live recording ‘Four’ & More as a boy, trumpeter Nicholas Payton has been on the hunt ever since for the uniquely metronomic thump of Ron Carter’s bass accompaniment. Seemingly finding no adequate substitute, Payton’s latest LP, Smoke Sessions, sees him finally paired with the legendary bassist, alongside longtime drummer Karriem Riggins and guest features from another ‘Four’ & More alumnus, saxophonist George Coleman.

The 10-track collection is far from a tribute to ‘Four,’ though, comprising non-Davis compositions that range from Riggins’ hip-hop swagger to Carter’s walking consistency and Payton’s own funk-inflected fluidity. Opener “Hangin’ And A’ Jivin’” sets the tone, with Payton playing his sprightly melody on the keys and taking an expansive, deep-swinging solo first behind the piano then on trumpet, while Riggins and Carter lock into a tessellated groove. Saxophonist Coleman then makes the first of two appearances on “Big George,” a tender balladic opening that morphs into a swampy funk, before his second showing on “Turn-a-Ron” gives him ample space to fly through chromatic 16th notes over Riggins’ brushstrokes.

Payton’s skill comes in allowing room for Carter and Coleman’s virtuosity to shine, while placing them in subtly updated contexts. There is the J Dilla-esque beat of “Big George,” where Coleman swings to a boom-bap, for instance, while the version of Herbie Hancock’s “Toys” sees Carter play over almost atonal dissonance on the keys, before implementing a descending walking line. The suite “Lullaby For A Lampost,” dedicated to New Orleans jazz musician Danny Barker, meanwhile, artfully transposes a traditional funeral procession song into a neo-classical melodic minimalism. Here we hear Carter’s economy of phrasing, plucking plaintively over Riggins’ snare drum brushwork, before the second part of the 12-minute suite picks up the pace, swinging into a distorted funk that provides the momentum for a delicate solo from Payton.

In this way, Payton showcases the timelessness of Carter and Coleman’s skill — their ineffable capacity to slot into new combinations and compositions with the open-eared willingness to swing. Theirs is the beating heart of jazz and long may its mantle be carried by Payton, Riggins and those yet to come.