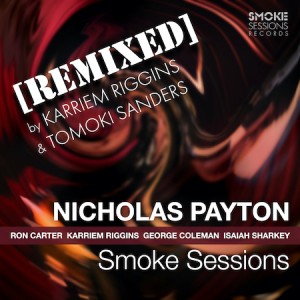 It was big news in the early ’90s when Peter Gabriel made some of his raw tracks available for remixing, and again, in 2006, when David Byrne and Brian Eno enabled fans to download elements of their album My Life In The Bush Of Ghosts to use for their own purposes.

Today, it’s commonplace for musicians to welcome reimagination of previously issued work, but Nicholas Payton has introduced some additional layers of meta with an EP-length remix of tracks from his recent Smoke Sessions album. Although the tracks on Smoke Sessions already pulsed with contemporary-sounding rhythms, courtesy of bassist Ron Carter and drummer Karriem Riggins.

But Payton had more in mind; he’d already planned to assign tracks to Riggins and Tomoki Sanders to put the largely acoustic music through their digital blenders.

That postmodern bent already had a head start, considering that “Levin’s Lope,” one of the four songs Payton plucked from Smoke Sessions, had already re-purposed a Carter-inspired bass line from an earlier Payton session. To that, producer Riggins adds an ear-candy Payton horn riff from “Hangin’ In And Jivin’” to get things underway.

There’s a distinct lack of ego — or is it perceived ego? — in the way Payton signs off on remixes like Riggins’ take on “Gold Dust Black Magic” and Sanders’ treatment of “Hangin’ In And Jivin’,” which both transform Payton’s lyrically flowing compositions in blunter, less chops-oriented performances.