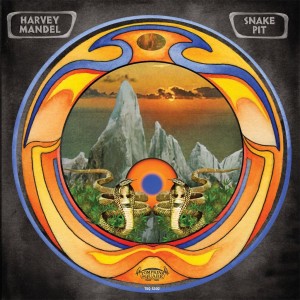 Casual fans of the blues may not know Harvey “The Snake” Mandel by name, but they know his sound. For nearly five decades, the Chicago bluesman’s signature timbre—his nickname is the “King of Sustain”—has left its mark on recordings by numerous blues legends, including Howlin’ Wolf, Muddy Waters, Otis Rush and Albert King. In addition to his long solo career, which launched in 1968 with the release of his debut, Cristo Redentor, he spent years touring and recording with powerhouse blues–rock groups, such as Canned Heat, John Mayall’s Bluesbreakers and The Rolling Stones. Mandel’s trademark sound is as supple and searing as molten steel, and his improvisational vocabulary is vast, drawing from various dialects of Chicago blues, prog–rock, jazz and even world music. Snake Pit—his 15th disc and first widely distributed album in 20 years—gathers these divergent threads into a single, radiant strand, and the resulting sound positively vibrates with all that collective energy. The groove is nowhere more trenchant than on the album–opening title track, on which Mandel’s heart–piercing tone, tweaked to a distorted crunch, gnaws at a circular blues lick. Curtains of synth provide the background for the gauzy “NightinGail,” which finds Mandel casting spidery chords and sinewy single–note lines into an echo chamber of reverb, and there’s a tinge of Santana–esque Latin rock on “Baby Batter,” which rumbles atop a layer of bongos and güiro. Not to disappoint the six–string die–hards, Mandel engages in considerable pyrotechnics on rock–heavy tracks like “Space Monkeys” and “JackHammer,” and his ode to B.B. King features a healthy dose of skronking and shredding. But it can be immensely satisfying to hear him unwind on a slow blues like “Buckaroo,” on which he proves that a low flame burns just as hot.