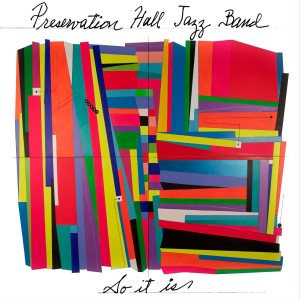 Bassist/tuba player Ben Jaffe, who leads the Preservation Hall Jazz Band, recently commented on the mission of the long-running New Orleans institution: “Interpreting the repertoire that’s been around for 100 years is one thing, but the challenge is to keep that repertoire and those traditions alive while at the same time being honest about who you are as a musician, allowing all of your musical influences to be reflected in what you create.” The band’s new album, which is only the second one in its discography to feature all original compositions, reflects the influence of indie rock, hip-hop and Afro-Cuban rhythms (which PHJB was exposed to during a trip to Cuba). So It Is was produced by David Sitek of the acclaimed rock group TV on the Radio. The result is a 34-minute, fat-free joy ride. PHJB has been around for decades, but the new album makes it clear that these musicians do not want to be thought of as a dusty museum exhibit. The octet has cranked up the fun factor with a program that features shoulder-shaking, hip-swaying tunes that will fill the dance floor. The Afro-Cuban influence is evidenced on “La Malanga,” which is spiced with Branden Lewis’ wailing trumpet and Kyle Roussel’s compelling piano lines. On the track “Innocence,” Charlie Gabriel’s clarinet adds an intriguing, almost world-music flair. Whether he’s playing organ, acoustic piano or Wurlitzer electric piano, Roussel—who is a relatively new addition to the band—keeps the sparks flying. Meanwhile, the tenor sax duo of Gabriel and Clint Maedgen ensure that the infectious PHJB vibe anchors the proceedings. Between gigs at the enormous music festivals Coachella (April 14 and 21) and Bonnaroo (June 9), the PHJB will make a stop at the Highline Ballroom in New York City (April 25).