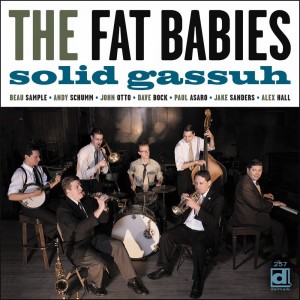 Classic jazz, which is a good term for jazz styles that originated before the swing era, can be thought of as the true underground music of the 21st century. Largely absent from television and (with a few exceptions) radio and the press, it inhabits a parallel world from that of more modern jazz. Classic jazz has its own festivals, record labels, cruises, clubs, publications and modern-day heroes. The music did not end in 1930 or 1970, as proven by the existence of The Fat Babies and other worthy bands.

Based in Chicago—a city that spawned its own brand of trad jazz—The Fat Babies were founded by bassist Beau Sample six years ago. Since that time, they have built up a large repertoire and demonstrated quite a bit of versatility. Solid Gassuh features The Fat Babies emulating many different groups, mostly from the 1926–’32 period. Rather than being hard-charging Dixieland, the performances mostly have The Fat Babies sounding like a relaxed but hot dance band from the time, despite only having three horns. While the group sometimes uses transcriptions from vintage records, their solos are creative within the genre, rather than pure copies. With the exception of “Did You Ever See A Dream Walking?” (a dance band chart with Asaro contributing a period vocal) and an exuberant version of “Maple Leaf Rag,” none of these pieces would qualify as standards. Certainly, one does not o en hear “Pencil Papa,” “Sing Song Girl” and “Parkway Stomp” covered by contemporary bands, even in the trad-jazz world. Solid Gassuh is a must for anyone interested in early jazz.