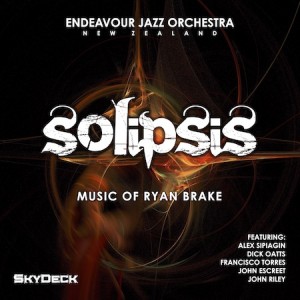 The concept behind the Endeavour Jazz Orchestra New Zealand is laudable. The ensemble was created primarily to feature the best young jazz composers in New Zealand, and it features many of the island nation’s best jazz musicians playing alongside some of the world’s top jazz artists — Alex Sipiagin on trumpet, Dick Oatts on alto saxophone, Francisco Torres on trombone, John Escreet on piano and John RIley on drums.

Normally that’d be enough plot line for an hour of exceptional jazz. But the Endeavour Jazz Orchestra New Zealand’s first project has another angle. Solipsis — Music Of Ryan Brake bills itself as inspired by elements of the critically acclaimed 2008 film Synedoche, New York. The 14-year-old movie stars the late Philip Seymour Hoffman as a theater director staging an increasingly elaborate production with no real sense of time; its development twists on for years. The titles of the six movements of Solipsis reference things said or seen in the film. The first is a big one, “Somewhere Between Stasis And Anti-stasis,” which sums up the unreality of the film overall. The more than 20 musicians (the majority of them horn players) on hand in the orchestra start the proceedings with a cheerful chorus and then start walking around with the arrangement before showcasing a beautiful yet dizzying solo from Escreet, who’s consistently on fire throughout the album.

“Sycosis And Psychosis” refers to a scene in the movie in which Hoffman’s character Caden Cotard explains to a child the difference between the two — one is a skin condition; the other a troubled mental state — as it’s clear while he acknowledges he has the former, he also has the latter. On the track here, the orchestra stages a slower number with Escreet and guitarist Nick Granville thoughtfully mirroring each other, then members of the ample horn section do the same before seizing the composition’s line to twist it around for a while, and then hand it back to the guitarist and pianist. The song then takes a time-out for a languid guitar solo and another notably complex, expressive piano solo. For all the talent enlisted here, Escreet and Granville may be the project’s true stars.

“Infectious Diseases In Cattle,” a phrase Cotard considers as the title of his play at one point, starts in a hurry and then cuts the tempo ever so slightly to give the horn players some room. “The Burning House,” a visual element repeated throughout Synedoche, New York, highlights Brake’s skills with composition, particularly arrangement, before coming to an abrupt halt (he seems to like ending a song that way).

“Simulcrum,” another title Cotard considers, is a slower, moodier number that builds in drama and boasts some of the best horn solos here, especially from trombonist Francisco Torres.

The album’s closer, “Lighting An Obscure World,” yet another title Cotard considers, wastes no time in bringing together all the musicians on hand for a full-ensemble jam. Over the course of the 12-minute track, the players try virtually everything, even exploring a Latin feel before allowing space for an unaccompanied piano solo.

This is the Endeavour Jazz Orchestra New Zealand’s inaugural release. Let’s hope more are on the way.