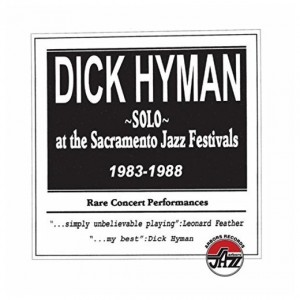 In New York, homegrown piano hero Dick Hyman is so beloved among his neighbors that the city’s mayor, Bill de Blasio, proclaimed July 18, 2017, to be “Dick Hyman Day.” There’s good justification for the honor. Hyman, a 2017 NEA Jazz Master, is a pianist of longstanding grace and bountiful talent, with an ability to adapt to nearly any historical style, from stride to bop to modernist sound-painting. His diverse discography boasts more than 25 titles as a leader (including 1969’s MOOG: The Electric Side Of Dick Hyman), and over the course of his lengthy career he’s been a perennial presence at jazz festivals around the country. This compilation on the Arbors Jazz label captures the pianist at the top of his game, performing solo at the Sacramento Jazz Festival over the course of five years in the mid-1980s. Recorded by a super-fan who stowed a simple Sony Walkman recording device in Hyman’s piano, the tracks are remarkable for their stylistic range, technical facility and self-generating energy (as well as their surprisingly good recording quality). Look no further than the aptly titled “Virtuoso Rag” to catch the full force of Hyman’s brilliance. The song blasts off at a blistering pace, Hyman’s left hand leaping across the keyboard as his right unfurls flawlessly articulated ribbons of sound. And for a change of pace, turn to Hyman’s interpretation of “Stella By Starlight,” on which the pianist burrows into the song’s essence, slowing parts down, dressing parts up and imbuing the indelible melody with fresh vigor. His treatment of Great American Songbook chestnuts—including whirlwind takes on “’S Wonderful,” “How High The Moon” and “All The Things You Are”—is compelling, but it can be just as thrilling to hear him dig in deep on a blues, which he does with intense focus and unrelenting enthusiasm on “Jazz Me Blues” and “Gulf Coast Blues.”