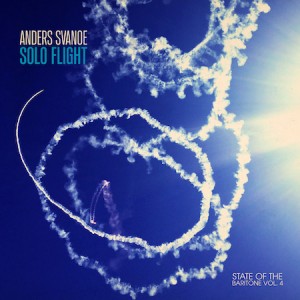 Beyond the musical pleasures and sonic adventurism of Anders Svanoe’s latest solo dispatch, the project’s appeal is bolstered by a sense of crusading zeal. Specifically, this fourth edition of the saxophonist’s State Of The Baritone series casts a layered spotlight on the expressive possibilities of the instrument.

In keeping with the aeronautical theme of earlier work, Svanoe’s song titles usually cling to flying motifs—“Aerial View” and melancholy-tinged closing track “The Open Blue Sky.” More generally, he latches onto the concept of flying solo, but the “solo” definition is somewhat deceptive; Svanoe performs by himself, while overdubbing parts.

His self-generating ensemble generally involves bari duos, as with the breezy blues opener “Grounded” and the pensive, rubato “Long Runways,” where Svanoe uses his horn in twin roles as melodic voice and low-end bass, capitalizing on the instrument’s flexibility. The saxophonist’s truly solo “Solo Flight” opens gently, garnering concentric force as it goes. But denser trio pile-ups can suggest the rangy accretion of the World Saxophone Quartet, whose wily persona is echoed on “Bird Turbulence” and “Parker’s Wings.”

Like Jon Irabagon, Svanoe’s sometimes-collaborator, the baritone player commands a diverse, fairly full-service musicality on his horn. And on this recording, he keeps the improvisatory spirits in check without sacrificing melodic logic or other time-honored jazz values. With the State Of The Baritone series, the saxophonic underdog has been duly served and celebrated.