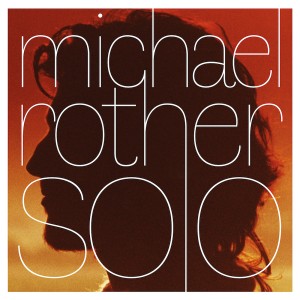 German psychedelia’s tense simplicity pretty regularly offers up some astonishing beauty, as well as countless avenues to chase down transcendence.

As guitarist Michael Rother worked through four studio albums collected for the Solo box set—Flammende Herzen (1977), Sterntaler (1978), Katzenmusik (1979) and Fernwärme (1982)—a sort of ecstatic calm wavered over the proceedings, something separate from the wild proto-punk vibes on the pair of properly issued Neu! albums he contributed to in the early ’70s.

The guitarist’s unrecorded stint in Kraftwerk, his work with Harmonia and contributions to film scores, some of which are included on the LP version of Solo, provide evidence of an expansive career. But this cache of recordings, where the guitarist is joined by Can drummer Jaki Liebezeit, should be understood as standing on equal ground with his earliest ensemble work.

The first pair of discs in the Solo collection hedge a bit closer to what folks might think of when conjuring some vision of an ur-krautrock group. And while Katzenmusik heralds the coming decade, Fernwärme solidifies a colder feel, even as some of Rother’s most placid moments crop up. But the shift’s mostly in service of Rother painting grandiose statements with his guitar, as opposed to keeping up with Liebezeit, who makes for a cooled-out sort of companion when contrasted with the intense histrionics Klaus Dinger injected into Neu!.

More than 20 years back, Chronicles I cobbled together bits and pieces of what’s laid out here across 6 LPs or 5 CDs. But even if this portion of Rother’s career was scattered around and in-print, housing these early “solo” efforts in a single collection helps fill in part of kosmische’s history that, until now, likely remained obscured to legions of Stateside listeners.