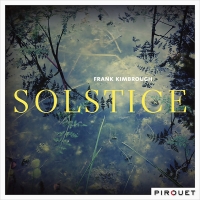 Frank Kimbrough is a pianist of uncommon tenderness and restraint at the keyboard, attributes that have made him an ideal accompanist to some of jazz’s most progressive composers and performers. His musical history is flecked with extraordinary partnerships. Upon first moving to Washington, D.C., he had the good fortune of crossing paths with vocalist/pianist Shirley Horn, with whom he struck up a musical partnership. After relocating to New York City, he traveled in the same circles as Carla Bley and Maria Schneider, whose band, The Maria Schneider Orchestra, he eventually joined. Released in November, the month of his 60th birthday, Solstice is Kimrbough’s expression of gratitude for the colleagues and mentors in his life. The album features eight renditions of compositions by a handful of dear friends, as well as one original that spotlights Kimbrough’s trio mates, bassist Jay Anderson and drummer Jeff Hirshfield. Horn, Bley and Schneider are all paid tribute here, as are Andrew Hill, Annette Peacock and Paul Motian, and Kimbrough’s life partner, Maryanne de Prophetis, also receives a lovely tribute as the subject of the delightfully poetic title track. There is both a deep sense of nostalgia and powerful glint of optimism in the work of Kimbrough’s trio. The group’s take on “Seven,” by Bley, dwells as much in shadow as in light, giving equal consideration to strains of sadness and strength. They produce a similar effect on “Here Comes The Honey Man,” a take on the Horn classic that, like a perpetual motion machine, winds in on itself as it unfurls, the energy never flagging, even during moments of profound stillness. The album closes with Schneider’s “Walking By Flashlight,” which appeared on her 2013 album Winter Morning Walks, a collaboration with Dawn Upshaw. Kimrbough’s version preserves the pristine, first-snow brilliance of the original, but he finds new channels into the emotional core of the song, bringing to light themes of wonderment and discovery.