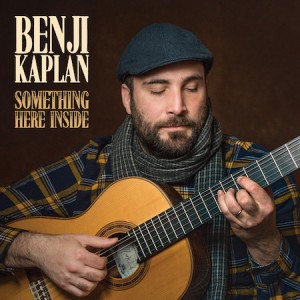 Intricate acoustic guitar fingerpicking, executed with feeling, is admirable from every aspect of musical craft and goes down easy as listening. Benji Kaplan’s sixth album, returning to the nylon-string solo format of his 2011 debut, is no exception: eight songs re-imagined, deftly plucked, recorded so closely his fingers on the frets become part of the sound and you’re right there.

The intimacy emphasizes immediacy in performances that might otherwise seem pre-planned — as if such complexly spun creations are only marvelous if they’re not figured out in advance. Kaplan doesn’t use beats or jazz rhythms for underpinnings, though he clearly could. Kaplan has been mostly associated with Brazilian-influenced projects, but he obviously knows this repertoire of standards inside-out, allowing him to give even the overly familiar melodies fresh depths via unusual arrangements, imaginative counterpoint and complex internal voicings. Saudadé shadows his sensitive renditions of a selection weighted towards romance (is that a trope of COVID-19 recordings?), but everything’s complicated. It’s all in the lineage of the modern classical style, established by Andres Segovia, adopted and advanced by such virtuosi as Leo Brouwer and the Assad Brothers. Like them, and the late steel-string Americana master John Fahey, Kaplan takes time with his renditions, the better for their details and implications. The expressivity of his interpretations resonates in the notes and phrases he lets ring. Regardless of the degree of improvisation involved, this music is flows, skillfully, thoughtfully and freshly realized.

Something Here Inside: The Song Is You; With A Song In My Heart; If Ever I Would Leave You; Smoke Gets In Your Eyes; So In Love; Anything Goes; But Not For Me; Easy To Love.
Personnel: Benji Kaplan, guitar.
Ordering Info: benjikaplan.com