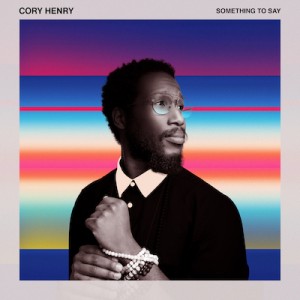 Organist and singer Cory Henry fuels Something To Say with the best strains of classic ’70s soul, delivering a fetching album that emits feel-good energy, even during these times rife with racial injustice. Like many soul pioneers, Henry knows how to balance seemingly anodyne, amorous songs with cuts that seethe with social criticism. And like his forebears, Henry’s apt at synthesizing gospel, jazz and r&b into a holistic sound.

The album kicks off with “Don’t Forget,” a smooth Chicago-style stepper that reveals Henry’s fondness for Stevie Wonder’s harmonic language. Lyrically, the song establishes the album’s initial optimistic outlook, the vibe carrying over to the entrancing medium-tempo “Happy Days.” Something To Say generates more power, however, on its darker cuts. The bewitching ballad “Icarus” points in the direction of Childish Gambino, especially with the harrowing theme of falling from dreamy aspiration to bitter reality. The song also marks a thematic shift for the album, as the material grows more political—notably the somber “Black Man” and cinematic “Say Their Names.”

As an artist who’s progressed from journeyman organist for artists like Yolanda Adams and Snarky Puppy, Henry slowly is cultivating an identifiable voice that elevates him well beyond session-player status. On Something To Say, his graceful juxtaposition of themes never comes off preachy or treacly. The music is a testament to his prowess as an instrumentalist, bandleader and songwriter, because it engages without blaring its importance.