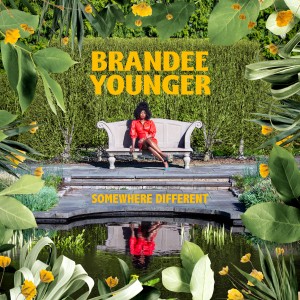 With Somewhere Different, Brandee Younger makes her much-deserved major-label debut as a leader. Hardly anyone does what she does. Not only is her music an exalted meeting place for European classical and African-American musical forms, but she is one of the few who can, as a practitioner, further the legacy of singular composers like Alice Coltrane and Dorothy Ashby. No small responsibility.

Admittedly, the harp — with its lyrical timbre and arpeggiated vocabulary — shouldn’t fit so neatly into jazz combos. But Younger’s relentless sense of pulse generates the drive on her smooth-edged compositions, and the evenly titrated drum lines (by Allan Menard and Marcus Gilmore) and grounding bass inflections (by Rashaan Carter, Dezron Douglas and Ron Carter) provide rhythmic ballast.

Thus “Reclamation,” the album opener, gambols at an exciting clip, accentuated by synchronized solos between saxophonist Chelsea Baratz and flutist Anne Drummond, and “Spirit U Will,” one of two Douglas compositions, allows trumpeter Maurice Brown a similar freedom to extemporize.

You can hear Younger’s expertise at syncretism on the title cut, with its classical melodies and sudden detours into synth rhythms; on “Love & Struggle,” an all-acoustic interplay of fluttering chords and driving beats; and “Tickled Pink,” a graceful air atop a riding groove. Finally, Ron Carter’s appearances on “Beautiful Is Black” and the blues-leaning “Olivia Benson,” Douglas’ second composition, round out the album with satisfying moments of straightahead exultancy.