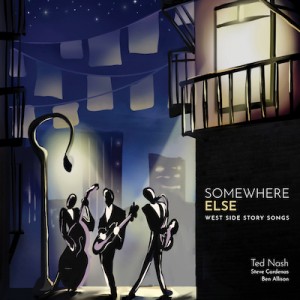 When NEA Jazz Master Ron Carter was asked why he so often plays standards when so many musicians insist on writing their own tunes, he was typically succinct. “Artists are not necessarily the best writers, and the proof of that is that the only people who play their material is them. When the new guys write better tunes, then maybe I’ll play them.”

Multireedist Ted Nash, it should be noted emphatically, is a highly accomplished composer and arranger for ensembles both large (the Jazz at Lincoln Center Orchestra; his own big band) and small (his quintet and trio). His gorgeous 2016 Presidential Suite deservedly won him two Grammy Awards.

With no pressure to prove himself as a composer, Nash now takes on the daunting challenge of interpreting one of the 20th century’s greatest musical treasures, West Side Story. The songs that Leonard Bernstein and Stephen Sondheim wrote for it, steeped in the sounds of New York jazz and Latin music, have been played in jazz interpretations before, but the creativity that Nash and his trio-mates—guitarist Steve Cardenas and bassist Ben Allison—bring to the task are exceptional. They transform this passionate material into both a tribute to and a meditation on the songs’ surpassing beauty and power.

With just guitar, bass, and Nash alternating between tenor saxophone and clarinet, the trio deftly captures the expressive power of the Bernstein orchestrations with a few bold strokes, then riffs organically off them in constantly surprising ways. Whether it’s the relative complexity of the improvised, three-voice counterpoint with which they open “Tonight,” or the simplicity of Cardenas wrapping gorgeous improvised lines around Nash’s pure statement of the melody on “One Hand, One Heart,” the album is a revelation; three superlative musicians reveling in the Bernstein score’s most emotional moments with tenderness and candor. One has to believe the maestro, who loved the kind of jazz energy and imagination on display here, would have approved.