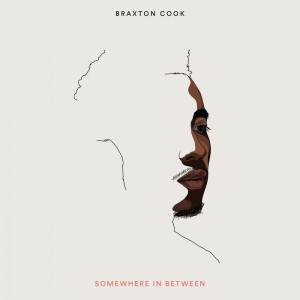 Last year, saxophonist Braxton Cook left a supporting position in Christian Scott’s band to pursue his own musical voice, and less than a year later produced his own debut album, Somewhere In Between. The full-length project weaves instrumental and vocal soul-jazz together into a cohesive and concise 44-minute statement that would suggest the mid-20s Juilliard graduate is just beginning a career that we’ll be watching for years to come.

Cook is regarded for his alto saxophone playing, but Somewhere In Between finds him exercising his ability as a singer and songwriter as well. “I Can’t” and “You’re The One” scan as vocal ballads, while “Run Away” and the title track are a bit more in line with neo-soul. His singing is good, but the raw vocal talent isn’t enough for Cook to set down the saxophone for good. On the instrumental selections, he continues to speak with the instrument he’s best known for.

“Hymn (For Trayvon)” is an understandably intense moment for the album, and Cook chooses to express his feelings on the topic using composition and saxophone instead of trying to put it into words. This song in particular allows the rest of the band to shine, with Mathis Picard’s piano and Andrew Renfroe’s guitar cutting especially hard. It’s the record’s most urgent song until “Pariah,” featuring Samora Pinderhughes, another artist who injects a powerful political message into his music.

Through tones of love and political intensity, Braxton Cook has crafted a wonderful debut record that showcases a variety of talents. If he can cultivate those talents as a bandleader, he’ll be a prominent voice for this generation of musicians. DB