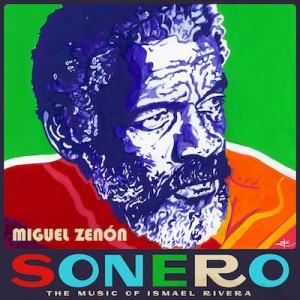 The alto saxophonist returns to the Puerto Rican songbook with this ingenious homage to iconic singer Ismael Rivera, whose work with Cortijo Y Su Combo and Los Cachimbos was just as envelope-pushing and formidable as Miguel Zenón’s improvisations are today. Widely known as “El Sonero Mayor,” Rivera often would sing with a wanton spirit, create dazzling rhythmic phrases. He was known to extend a song’s chorus with coruscating passages or just improvise across choruses. And his work in the 1950s helped introduce Puerto Rican rhythms—bomba and plena—to audiences across the Caribbean and Latin America.

Zenón absorbs many of Rivera’s idiosyncrasies as points of departure. The results are marvelous, especially the saxophonist’s fizzy accord with bandmates. Luis Perdomo conveys much of the elegiac drama that surged through Rivera’s songs through his evocative piano accompaniments and rhythmically agile improvisations as evidenced by the slippery makeover of “Quítate De La Via, Perico.” The quartet’s rhythmic engine—bassist Hans Glawischnig and drummer Henry Cole—steer the bandleader’s probing passages through unexpected corridors, maintaining logical momentum while embracing dynamic pliancy.

Still, the brightest star is Zenón. A consistently brainy improviser, he often engages in blistering lines that zigzag as if compositions were sonic schematic diagrams. That brio is certainly present on this recording, but there’s a newfound emotional warmth to his work, particularly on the sensuous “Traigo Salsa” and the transfixing “Si Te Contara.”