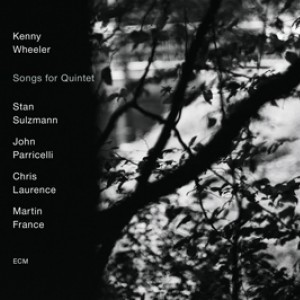 Canada-born, London-based trumpeter Kenny Wheeler, who died on Sept. 18 at age 84, was a visionary musician who had a profound influence on modern jazz. A veteran of the British studio scene, Wheeler was known for his artfully constructed orchestrations, and he had a knack for crafting simple melodies that would veer off into fresh, unforeseen directions. This trademark sound pervades much of Songs For Quintet, which Wheeler recorded in December 2013 at London’s Abbey Road Studios. Melodic and lyrical, but never predictable, the nine songs that make up this excellent album typify Wheeler’s artistic approach. His playing here is cautious and deliberate. There are no shrieking high notes or incendiary lines. Wheeler specialized in nuance: the beauty of a repeated phrase, the complexities of a sustained note, the gravity of a long pause. Wheeler’s bandmates on Songs For Quintet are keen on sharing his sensibility. Tenor saxophonist Stan Sulzmann’s velvety lines on “Pretty Liddle Waltz” provide the perfect counterpart to Wheeler’s hushed, introspective solo. Guitarist John Parricelli, the mastermind behind the album’s serene sonic landscape, demonstrates superb discretion with his comping on the dark, meandering “Seventy-Six.” Bassist Chris Laurence’s warm, resonant tone sings throughout “Canter No. 1,” and drummer Martin France creates bright, vivid layers with meticulous time on “Sly Eyes.” Wheeler’s tone may have lost some of its luster and strength toward the end of his career, but the lack of volume doesn’t prevent the legendary trumpeter’s gentle voice from coming through loud and clear. It is a voice that will be sorely missed.