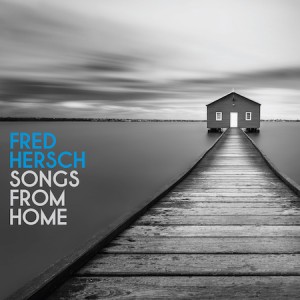 Songs From Home is literally that, an album recorded at the pianist’s Pennsylvania residence and inspired by our shared predicament of social isolation. The idea was, he said, “to play some music that would make people happy.” And as such, the emphasis is strongly on the tuneful and familiar.

Hersch, however, is too talented to let feel-good intentions turn this into Jazz Lite. Take, for instance, the album-opening rendition of “Wouldn’t It Be Loverly.” On the one hand, the rubato tempo and pastel harmonies neatly conjure the pleasures of home that Eliza Doolittle dreams of in My Fair Lady, giving the number a warm-and-fuzzy vibe that’s easily background-able. Listen closely, though, and it’s hard not to be awed by the eloquence of his pedaling on the intro, or the masterly harmonic substitutions he works in as the tune progresses. It’s like getting comfort food from the French Laundry’s Thomas Keller.

“After You’ve Gone” uses a graceful, stride-style left hand to evoke the tune’s old-timey charm, and then, seven songs later, Hersch burlesques that approach for a delightfully witty amble through the Beatles’ faux old-fashioned “When I’m Sixty-Four.” Staccato phrasing and chattering, offbeat accents turn Cole Porter’s “Get Out Of Town” into an itchy charmer, while the mournful longing of “Wichita Lineman” sparks a dazzlingly contrapuntal solo, as if rendering the lyric’s romantic dilemma through intertwining melodic lines. In short, there’s depth if you want it, and prettiness—everything one might wish for during a quiet evening at home.

Songs From Home: Wouldn’t It Be Loverly; Wichita Lineman; After You’ve Gone; All I Want; Get Out Of Town; West Virginia Rose/The Water Is Wide; Sarabande; Consolation (A Folk Song); Solitude; When I’m Sixty-Four. (57:14)
Personnel: Fred Hersch, piano.