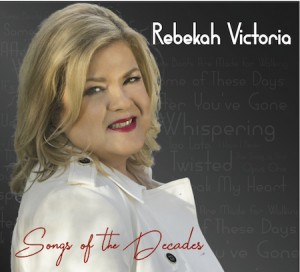 The late, great August Wilson wrote a play emblematic of each decade of the 20th century. Vocalist Rebekah Victoria angles at a similar feat with her Songs Of The Decades, evoking Tin Pan Alley in the process. And from “Some of These Days” (1910) to “Unbreak My Heart” (1996), Victoria applies a fresh patina to old chestnuts.

Bessie Smith and Ella Fitzgerald come to mind on her version of “After You’ve Gone,” but her swing here is vintage ’20s, thanks to trombonist Wayne Wallace—who arranged the music on Songs. And Mary Fettig’s clarinet has just the right tone and flavor for that dynamic period.

There is a collective gloss on “The Song Is You,” but Victoria has a few surprises in store when she lowers her voice, rather than hitting the expected high note. She can clearly hit them, though, as she does in the song’s final moments. What is consistently true about Victoria is her musicality—something showcased on the final bars of “Whispering” as it morphs into “Groovin’ High.”