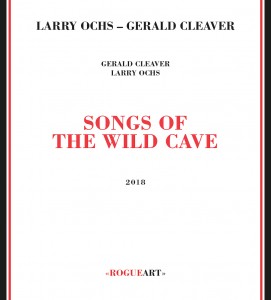 From the first cavernous notes played by saxophonist Larry Ochs, listeners should sense something unusual. The explanation is quite simple, though.

This duo with drummer Gerald Cleaver was recorded in a cave located in southwest France. And because improvised music relies heavily on tones, textures and pitches, performers are particularly sensitive to the environment in which they play and constantly on the lookout for new experiences. That’s likely why Ochs and Cleaver agreed to venture into the unknown with the unique Songs Of The Wild Cave.

Luckily, both saxophonist and drummer find their footing, progressively engaging with their surroundings and gaining in assurance. On the opener, the aptly titled “First Steps,” Ochs is in probing mode while Cleaver opts for percussion devices that he gently shakes. As confidence builds, the saxophonist grows impassioned and forceful, and the drummer introduces beautiful thunderous rolls. From then on, rhythm becomes Cleaver’s main focus, whether launching into weighty patterns, gallops or polyrhythmic figures. The rich backdrop he provides allows Ochs to be grounded solidly and to deliver one of his strongest performances in recent memory.

Songs Of The Wild Cave: First Steps; Into The Air; Deeper; Down; Ringing It In; Rooted In Clay; Light From The Shadows. (60:51)
Personnel: Larry Ochs, tenor, sopranino saxophone; Gerald Cleaver, drums, percussion.