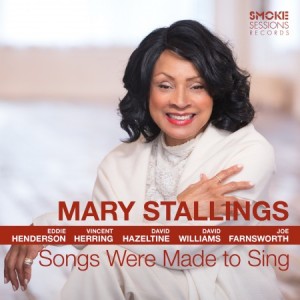 One of the most accomplished jazz singers of her generation, Mary Stallings is having a late-career renaissance that finally should result in the respect and popularity she deserves. At 79, her newest recording on Smoke Sessions, like her entire catalog, embodies time-honored jazz virtues: authenticity, rather than breathless artifice; concise, rather than overlong, solos; and a deep immersion in the blues, which never goes out of style.

She’s backed here by an exemplary quintet, including the impeccable pianist David Hazeltine, who also arranged; her old friend, veteran trumpeter Eddie Henderson (they went to high school together in her native San Francisco); altoist Vincent Herring; bassist David “Happy” Williams; and drummer Joe Farnsworth. Throughout, her voice remains supple and inviting, her interpretations deeply informed, and her occasional scatting both natural and inventive.

The songs on this outing were chosen to represent different chapters in her life, and she sings them with conviction and a survivor’s rueful wisdom. Among the highlights: an exquisitely torchy, bluesy reading of Harold Arlen and Ted Koehler’s “Ill Wind” with a lyrical trumpet turn by Henderson; an uptempo, deeply swinging version of Duke Ellington’s “Prelude To A Kiss”; and Alec Wilder’s immortal ode to the fleeting joys of youth, “While We’re Young.” In the latter, Stallings makes a minor, but telling, modification to the title phrase that utterly changes the song’s perspective, turning it into a wistful and moving reminiscence: “Songs were made to sing while you’re young/ Every day is spring while you’re young.”