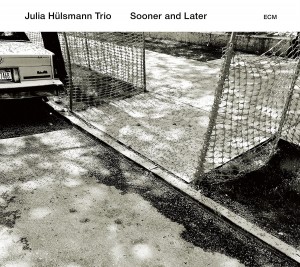 Sooner And Later dwells in many places where pianist Julia Hülsmann and bassist Marc Muellbauer lead and follow each other. Along with drummer Heinrich Köbberling (who emerges with pronounced force on his upbeat, tuneful “You & You”), Hülsmann and Muellbauer contribute original compositions, including one inspired by a melody written by 12-year-old Kyrgyzstani violinist Rysbay Abdykadyrow (the reharmonized, solemn “Biz Joluktuk”) and another by Radiohead (a gentle, somber “All I Need”).

The album, Hülsmann’s sixth for ECM, tacks toward visitations that come and go in unconventional ways. The writing serves the purposes of melody most often, with improvising subtle and understated. Muellbauer’s “The Poet (For Ali)” begins modestly, only to build in intensity with the album’s strongest rhythmic pulse.

One of the album’s liveliest numbers comes with Hülsmann’s bouncy, slightly funky “J.J.” The song’s theme conveys the band’s playful sides, the tune ultimately rolling into the album’s most delicious song.