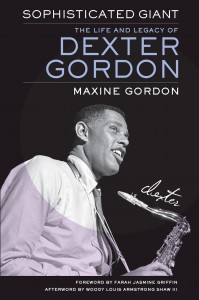 With the publication of Sophisticated Giant, independent scholar Maxine Gordon has delivered on her promise to her late husband, tenor saxophonist Dexter Gordon (1923–’90), to complete the biography he began writing late in his life.

Maxine draws upon personal memories, artist interviews, business correspondence, extensive historical research and Dexter’s own prose to paint a multidimensional picture of the artist affectionately known as “Society Red.” Beyond the details of his musical career—including early stints in the bands of Lionel Hampton, Louis Armstrong and Billy Eckstine, classic bebop recordings as a leader on Savoy and Blue Note, a dozen years spent living and playing in Europe, high-profile engagements upon his heroic return to the States in the ’70s and his Oscar-nominated, starring role in the 1986 film ’Round Midnight—the book reveals aspects of Dexter’s personal life that depict the man behind the music, ranging from the outrageously funny to the deadly serious.