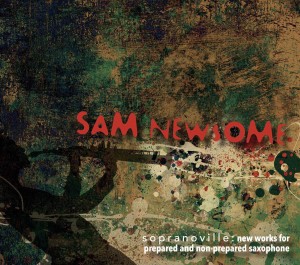 Sam Newsome shrewdly focused on soprano at the age of 30 after debuting as a tenorist on the no-nonsense Criss Cross Jazz label with Sam I Am in 1990. On his latest, the only concession to the straightahead constraints of his youth is a cascading take on “Giant Steps,” where overdubbed sopranos create a polyphonic waterfall.

An early interest in pure, peaceful Japanese traditions is recalled by the harmonic mode of the opener, which is subtly accompanied by tingling chimes affixed to the neckstrap of the soprano (one of Newsome’s “prepared” saxophone conceits). Further down the tracklist is an overt reference, “Japanese Court Music,” though the whistling harmonics against multitrack false fingered microtones share more with Mongolian throat-singing to these ears.

Despite his Zen-like discipline, Newsome has a sense of humor and his track titles are unpretentious and largely explanatory. He makes mischief with untempered techniques on “Hiss And Kiss,” opposing a plethora of puckering smooches with jealous hoglike grunts, then segues into African drum or muted marimba-like effects (conjured with key claps and clicks) for one of his “Clicktopia” interludes. Newsome’s soprano is rigged with, variously, punctured tape over the neck opening and aluminum foil on the bell, and he mimics musette and shehnai sounds by blowing through a plastic straw functioning as a double reed. The wonder of Newsome is the way he allies geeky experimentalism with controlled, never desiccated musicality.