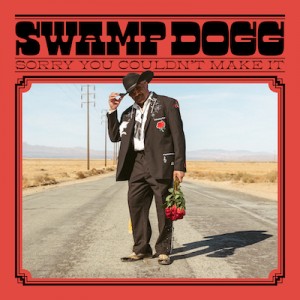 Jerry Williams Jr., professionally known as Swamp Dogg, has been releasing half-cocked soul records for 50 years now. Even though his music is fairly mainstream, his humorous, off-the-wall lyrics have garnered him a cult following that places his albums in the same collections as Captain Beefheart.

During the past 20 years, the Dogg has expanded his scope a bit, waxing a country album, a Christmas album, a rock album and even a disc devoted to calypso. Last spring, he promised that his next record would be another country effort, something he’d been burning to do before “time closes in on [his] ass.” But Sorry You Couldn’t Make It doesn’t sound like a country album, even though several songs here could be interpreted that way. It comes off more like a low-key singer-songwriter effort, like what you’d wish Bill Withers would do if he decided to make a comeback. After a string of records designed to shock, the relative sanity of this disc might be the biggest shock of all.

The Dogg revisits some older compositions: eulogizing a wife on “Billy” and examining a dysfunctional household on “Family Pain.” While the entire album is stellar, two collaborations with John Prine deserve special attention.

Despite Sorry’s moody overtones, it’s tough to think of this as a late-career statement. It just seems as if Swamp Dogg might have a few more good records in his system yet.