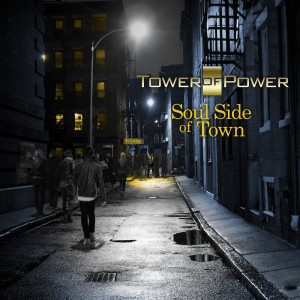 No signs of rust surface on Soul Side Of Town, Tower Of Power’s first album in eight years.

Bracketed by homages to the group’s base in Oakland, California, the album pops from the jump, largely thanks to Joe Vannelli, who co-produced the disc with ToP saxophonist/vocalist Emilio Castillo. This highly polished, well-sequenced collection of 14 tunes invites listeners to the soul side of town, where new lead vocalist Marcus Scott assures listeners that “Everybody’s welcome/No matter who you are/It’s one big family/And everyone’s a star.”

In this mythical place, there’s no greater pleasure than “Hangin’ With My Baby”—as long as you “Do It With Soul.” There can be setbacks, as on “Selah,” a swaggering track on which Castillo relates a tale of betrayal. But overall, an upbeat atmosphere rules across Soul Side Of Town, even on the less aggressive offerings.

Tower of Power’s lyrics aren’t generally what grabs a listener. It’s the groove, exemplified on such stop-on-a-dime cuts as the appropriately crispy “Butter Fried” and “After Hours,” a sultry lesson in saxophone interplay and cross-rhythms. Standout soloists include guitarist Jerry Cortez, Hammond B-3 master Roger Smith and Stephen “Doc” Kupka, a baritone saxophonist of puckish authority who co-wrote the majority of the tunes here alongside Castillo.

The music throughout this program is well-arranged—even on occasion surprising. Touches like Tom Politzer’s ebullient flute on “Do You Like That?” and the taste- ful strings underlining Ray Greene’s deliri- ous lead vocal on “Love Must Be Patient And Kind” effectively separate the heartfelt from the saccharine.

Tower of Power somehow has managed to freshen the familiar on this, its 25th long-play- ing disc. And along with the new recording, a pair of archival sets, as well as CD/DVD pair- ing, are being made available to help mark the band’s history, which stretches back to 1968.