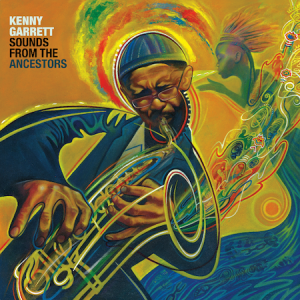 Always a highly percussive saxophonist, Kenny Garrett has found an exceptional partner in drummer Ronald Bruner. Their connection pushes Garrett to some intense heights, and when the rhythm section expands to include Lenny White and Rudy Bird on additional snare drums for “Soldiers Of The Fields/Soldats des Champs,” Sounds From The Ancestors moves into rarefied territory.

The piece — a long, serpentine journey — draws inspiration from both jazz warriors and the Black volunteers who defeated Napoleon’s troops in the Haitian Revolution. It’s an extraordinary performance, not just for its urgency and musicianship, but also for the vibrant throughline Garrett carves for himself, barking like a drill sergeant at points and vaulting into ever-higher gears in a Coltrane-like display of ecstatic release.

Coltrane is a touchpoint on “Hargrove,” as well, and Garrett’s ability to weave together a cogent continuum that merges post-bop, soul and hip-hop into a tribute for the titular trumpeter is another element that makes this an exemplar of contemporary improvised music.

What’s more, while Garrett’s virtuosity and high-concept vision are on display throughout Sounds From The Ancestors, he’s selfless in providing Bruner with showcases on the churning “What Was That?” and a tribute to drummers Art Blakey and Tony Allen.

In sum, this is a rare artwork that has a clear conceit yet doesn’t sound contrived. In addition, Garrett succeeds at combining deep, joyous grooves like “When The Days Were Different,” introspective solo piano explorations, and the ecstasy of his freer improvisations without making the album seem like a pastiche of styles. Instead, Bruner’s insistent playing and the highly flexible bass work of Corcoran Holt provide a constant link to the work’s African roots.