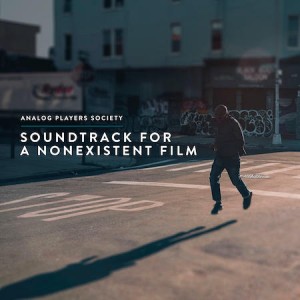 For this latest installment from the Analog Players Society—an eclectic collective featuring a rotating cast of top New York players since 2012—mix masters Amon Drum and Ben Rubin brought tenor saxophonist Donny McCaslin, pianist Orrin Evans, bassist Dezron Douglas and drummer Eric McPherson into the Bridge Studio in Brooklyn to jam on a few standards and do some group improv. That three-hour session served as source material for two recent albums. TILTED, released in August, consists of three full songs culled from the session (Jobim’s “One Note Samba,” Thelonious Monk’s “Epistrophy,” the collective improv “Freedom Is, But A Fraction of Humanity!”). Soundtrack For A Nonexistent Film, out this month, is a mesmerizing program of 11 short, streetwise, hip-hop-based cut-ups cast in a cinematic soundscape that’s flush with surreal dystopian ambience straight out of Gotham City. The first six cuts on Soundtrack were helmed by Amon Drum, and the final five by Rubin.

“Chase,” the opening track, evokes a run-for-your-life urgency with its pulsating drum loops, throbbing synth bass and anxiously winding saxophone lines. The slow-groover “The Water Is Rising” disorients with detuned, under-the-sea piano effects. “Space And Time” dwells on a simple, four-note piano motif that conjures vast stillness while the bass and drums drive the incessant ticking of the cosmic clock. Dreamy saxophone floats into the foreground on “Starry Night,” occasionally interrupted by the heavily processed mechanical clang of Evans’ toy piano. On “Rock The Block,” chromatic shifts in the piano, bits of wailing tenor and tasty acoustic bass lines all are layered over a foundation-shaking monster-walk drum groove. Soundtrack embraces a fuzzy analog vibe with a low end that frequently pushes into the red zone. Echoes of “One Note Samba,” with its suspended harmony, and “Epistrophy,” a font of chromatic motion, abound throughout these trance-inducing mixes, all of which were assembled by ear, without using any click. Amon Drum and Rubin have created something truly compelling with these mixes, which merit comparisons with the uncut material on TILTED.