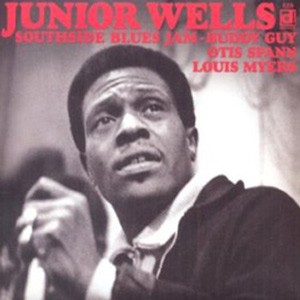 Junior Wells lives. The iconic blues singer and harmonica player passed away in 1998, but a reissue of his loose, raucous studio album Southside Blues Jam is yet another document proving that he won’t be forgotten anytime soon. Wells’ 1965 debut, Hoodoo Man Blues, is a classic blues album and a cornerstone release for Chicago’s Delmark label. That LP featured guitarist Buddy Guy, who would become a longtime collaborator with Wells (and later develop into a blues legend himself). Southside Blues Jam—recorded on Dec. 30, 1969, and Jan. 8, 1970—finds Wells fronting a band that includes Guy (on eight songs), guitarist Louis Myers (on nine songs), bassist Earnest Johnson, drummer Fred Below and Blues Hall of Fame inductee Otis Spann on piano. (It would be the pianist’s final studio session before he succumbed to liver cancer on April 24, 1970.) Wells is a force of nature here, whether he’s blowing mighty riffs on harmonica, bellowing a tune, squealing like an alley cat, imitating Howlin’ Wolf’s guttural delivery on “Got To Play The Blues” or exhorting his bandmates with comments like “Preach it, brother!” The original LP contained eight tracks, but this 73-minute CD reissue adds seven more, including two snippets that are brief but juicy: “Warmin’ Up” is just over a minute long, but it showcases an exciting musical conversation between Guy and Spann, illustrating how they could push each other and generate sparks. The incidental track “Lexington Memories,” which captures casual comments and jokes between takes, shows the camaraderie these musicians shared. More substantial is the muscular, six-minute bonus track “It’s Too Late Brother.” This is an example of the classic Chicago blues sound, spiked by patter in which Wells says to his pianist, “Would you do me a favor, Spann? Would you get up on the bass keys and kinda rap a little bit?” Spann complies with a rumbling, rolling motif, and then Wells yelps, “Get it! Ooo, shucks! Ain’t it nice!” That’s an understatement.