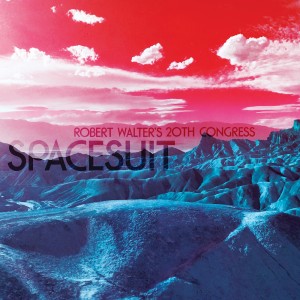 Throughout Spacesuit—an album that assembles a new amalgam of 20th Congress players and launches Robert Walter into science-fiction frontiers—there’s a clear sense of confident cohesion in chemistry and stylistic flow. The keyboardist’s troupe is set up in classic ’60s/’70s funk fashion. But the addition of sine-wave synthesizer tones on tracks like “Current Futures” and “Modifier” evokes futuristic sci-fi adventures. The half spoken-word sample, half chromatically ascending electronic flourish of the title track sends the album on a space-fueled mission. It’s as if each composition on Spacesuit is intended to embody a separate chapter of the ensemble’s interstellar journey.

Clashing a smooth Rhodes melody with a jittery synthesizer pattern, cycling perfect fifths and octaves with augmented fourths and minor sevenths, injects immediate tension into “Nerva & Dumbo.” “Emanate” exudes a vastness through its slower rhythmic hook and heavy-footed kick, contrasting with a stable and lighter-toned piano motif in a waltz’s three. Conversely, “Most Of All Of Us” introduces a lively cast of organ, drums, piano, guitar, bass and more. Such density, alongside the organ melody’s gradual crescendo, might convey a triumphant return to Earth from the ethereal places Spacesuit takes listeners. Here, Walter neatly could have completed his sonic journey with the subtle synthesizer fade. But the cleverly off-beat hi-hat, kick and rim shots on hidden gem “Electric Blanket” keep the music just unbalanced enough to make it all seem unfinished. Maybe Walter’s just leaving the door open for further exploration.