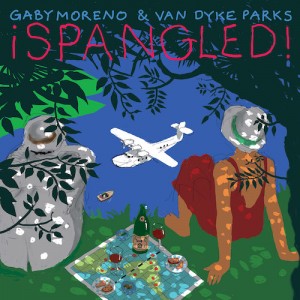 Oddly, for a tribute to music of the Americas, this project has its origins in Denmark, where in 2010 arranger Van Dyke Parks performed at the Roskilde Festival. His idea was to present songs that were Pan-American, utilizing the skills of singer Gaby Moreno, as well as an orchestra. ¡Spangled! is the studio distillation of that concept.

It’s an amazing bit of studio craft. Instead of a live orchestra, Parks had a half-dozen players overdub themselves into string, brass and woodwind sections, just as Moreno is layered into a choir of angelic sopranos. Pulling it off required multiple engineers and a heroic mix, and the results can be aurally amazing, as on the remake of the Harry Nilsson oddity “I’ll Take a Tango.”

It’s a cartoon-crazy blend of old-school rock, Latin schlock and orchestral whimsy, a combination that looks questionable on paper, but sounds convincing through the speakers. Although the stylistic range of the material is striking—Venezuelan joropo on “Alma Llanera,” Tropicália for “Esperando Na Janela”—the settings tend to sound the same, with dense vocal harmonies slathered atop fussily ornate countermelodies. Occasionally, as on Dori Caymmi’s “O, Cantador,” the orchestration is held in check, so the expressive beauty of Moreno’s voice can shine. Elsewhere, though, the focus seems less on the power of the songs than on the cleverness of the arrangements.