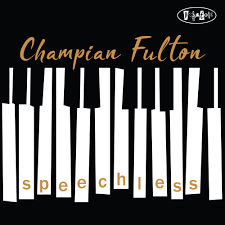 Born in Oklahoma to a musical family, pianist Champian Fulton made her musical debut at the ripe young age of 10, performing at the 75th birthday party of a family friend, the trumpeter Clark Terry. She has since become a major force on the international jazz scene, recording seven albums as a leader (while still in her 20s) and serving as an invigorating accompanist to giants of the genre, such as Lou Donaldson, Buster Williams and Louis Hayes. Her new album, Speechless, is not only her debut for the Posi-Tone label, it’s also her first program of all instrumental music. It is an intensely personal statement—brimming with delicate flourishes, brilliant runs and moments of quiet intensity—as well as an homage to her musical heroes. The influence of Erroll Garner is tangible on “Day’s End,” with its bobbing left-hand chords and lavish harmonization, and Bud Powell’s rippling dexterity is an obvious touchstone for “Somebody Stole My Gal” and “Happy Camper,” both of which hurdle along at a blistering clip while retaining a deeply grooving pocket. As a composer, Fulton tends to eschew clutter, with simple melodies that allow for endless personalization. The ballad “Dark Blue,” with its pattern of gently ascending chords, exemplifies as much, steadily accumulating depth and meaning as it crests toward a conclusion. “Tea And Tangerines,” meanwhile, is a wonderful portrayal of group interplay, a sunny waltz that evokes the elegance and intimacy of Bill Evans’ trio. Drummer Ben Zweig is especially crisp and articulate here, and bassist Adi Meyerson maintains a sturdy yet supple foundation. (Her vital contribution to the soul-tinged “Later Gator” is even more enthralling, full of punch and panache). Fulton’s vocals are essential to her stylistic identity, but it’s a treat to hear her focus exclusively on her pianism. Let’s hope this all-instrumental venture is the first of many.