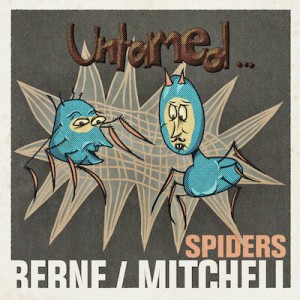 (Out of Your Head)

A series of direct-to-digital releases meant to capture jazz “in the wild,” Out Of Your Head’s “Untamed ...” series is one of the best ideas to have emerged from jazz’s indie underground in a while. Tim Berne’s participation is no surprise, given the DIY ethic of his own imprints, but the release of Spiders is especially satisfying given the bright light it shines on the reedist’s gifts as a composer.

Consisting of five new works by Berne, Spiders was recorded live in February 2020—a prepandemic last gasp. It’s a duet with longtime collaborator Matt Mitchell, and the connection between the pianist and saxophonist is astonishing. Not only do Mitchell’s voicings deftly illuminate the harmonic ideas suggested by Berne’s motivic writing, but his assertive left-hand lines and insistent counterpoint lay out the music’s rhythmic content so clearly that there’s no need for bass or drums.

But the best thing here is how tightly intertwined the writing and improvisation are. “Increminced” is filled with moments when the two momentarily fall into unison, then break into elaborately woven variations, while “Julius” (a tribute to Berne’s mentor, saxophonist Julius Hemphill) uses its probing theme as a latticework to support the players’ tuneful extrapolations and dramatically shifting dynamics.

Like the best chamber music, Spiders manages to be both compositionally intricate and conversationally intimate, a combination that rewards repeated listens.