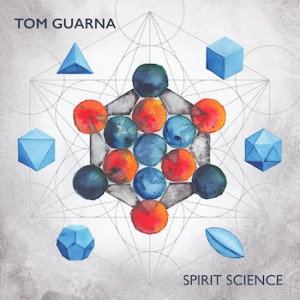 On the surface, few musical topics are less enticing than sacred geometry, which even Steve Coleman might reject as abstruse. Yet Spirit Science, the eighth album by guitarist Tom Guarna, is enticing—and accessible to boot. The mystical/mathematic concept (explained in the liners) contributes inspiration and a shroud of mystery to his quintet’s doings.

But some expressions of the enigma are more overt than others. At times, it’s no more than an obscure title, like the opening “The Trion Re.” (Unsurprisingly, its irregular melody and angsty solos by tenor saxophonist Ben Wendel, Guarna and pianist Aaron Parks shed no light on what the title means.) We can guess from the name of “The Genesis Pattern” that creation is at play; why its swing and improvisational energies are so urgent is less clear. Ditto “Metatron’s Cube,” virtually a rocker between Guarna’s distorted shards, bassist Joe Martin and drummer Justin Faulkner’s commanding pulse, and a plunging, adrenalized Wendel solo.

What that means in terms of the titular cube—a shape comprising all other shapes in sacred geometry—is anyone’s guess. Mystery is a more palpable force on the title track, whose serenity and gentle Martin solo suggest a motive for studying arcana. It’s even more true on the mood piece “Platonic Solids”; Parks’ eerie Rhodes and Guarna’s guitar-synth move over a groove of grim determination from Martin and Faulkner in a way that both forebodes and beckons. Several listens might offer a better understanding of geometric spirituality; the intrigue of the music, though, only will increase.