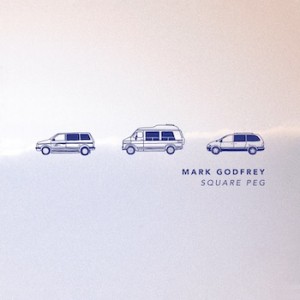 Square Peg is Mark Godrey’s second release as a leader, and it finds the Canadian bassist taking a quintet through 10 originals that he wrote during a four-year period while frequently traveling between Toronto and New York in a 2006 Dodge minivan. Many of the song titles have to do with making that drive, although “One Game Away From Winter” is a meditation on baseball.

The opener, “Black Stars,” begins with some otherworldly electronics before it becomes a fertile vehicle for solos by tenorist Allison Au and pianist Chris Pruden, briefly returning to the electronics at its conclusion. “Square Peg” is an atmospheric work with Godfrey commenting on the proceedings—à la Charlie Haden—as Pruden’s trills on the piano add some color. “No Gig Today” is relatively playful, a little reminiscent of Keith Jarrett’s American Quartet of the 1970s, and has plenty of interplay between the pair of saxophonists, including a surprising unaccompanied section. The slow and somewhat gloomy strut of “U.S.S. Rent-A-Car” makes one wonder if that particular car will survive the trip, while Matt Woroshyl’s adventurous preaching on the tenor takes honors. Other highpoints include the wistful ballad “One Game Away From Winter,” the hyper “Forty Minutes Or More”—which sounds like an attempt to get through a traffic jam—and a feature for Godfrey’s unaccompanied bass, the thoughtful “Bucket List.”

There are fine solos from each of the musicians here, but it’s Godfrey’s instrument that provides constant commentary and consistently sets the post-bop direction.