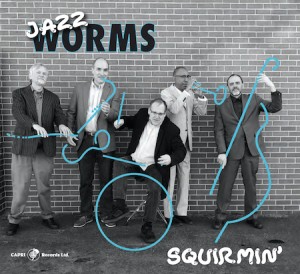 The acronym formed from their last names and used for this ensemble’s moniker attests to the cleverness of Jazz Worms, a Denver quintet that has been together since 1984, but in no way sounds tired. A variety of styles and approaches demands attention on Squirmin’, heralded by bassist Mark Simon’s “Launching Pad,” where Ron Miles’ cornet is set against Keith Oxman’s brawny tenor saxophone.

Produced with clarity and presence, the album pops throughout. While it pushes its intelligence to the forefront, passion and the effortless engagement that comes with familiarity also animate this purposeful recording. The only member not to write here is Miles, whose lean, understated lines and dry tone drive pianist Andy Weyl’s breathless “Lickity-Split” and twine with Simon on the bassist’s perky “What If All?” On “The Chimento Files,” an Oxman strut as tight as Paul Romaine’s drums, Weyl leads the way with a melodic solo that sets the stage for an entertaining duel between Miles and Romaine. The pianist comps with might and imagination, detouring into ragtime and the blues along his path. Simon and Romaine trade off far into the tune, the bassist plucking his way through Romaine’s blasts. Sharp and taut, “Chimento” locks this disc down with flair.