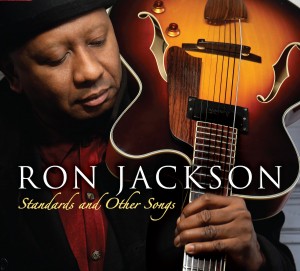 Guitarist Ron Jackson plays with the sterling technique and measured swing of a Tal Farlow or Bucky Pizzarelli, but it would be a mistake to think of him as a jazz traditionalist. His new album, Standards And Other Songs, contains plenty of unexpected twists and outré moments, despite the title’s anodyne initial impression.

First off, he recorded the album on seven-string guitar, an instrument that includes all six traditional guitar strings, plus a second A string, an addition that enriches its harmonic texture.

The eclectic mix here is almost as much “other” as it is “standards,” with jazz covers of several r&b hits, including Brian McKnight’s “Anytime,” Bill Withers’ “Lovely Day” and, most notably, Drake’s “Passion Fruit.” Jackson approaches these radio singles in the same spirit as a songbook favorite, with brisk fretwork, hard-to-resist feels and the occasional unorthodox reharmonization. With drummer Darrell Green and bassist Nathan Brown, Jackson holds these tunes in a tight swing format, without sacrificing their original essence as pop tunes. Reworked and refreshed, their consistent appeal comes as something of a revelation. For traditionalists, however, the standards on the recording will not disappoint. Jackson’s arrangements are erudite and smoothly executed: Listen to Brown’s deeply connected solo on the gently swinging ballad “Blame It on My Youth” or Green’s bright Latin clip on Clare Fischer’s bossa classic “Pensitiva.” In Jackson’s hands, these tunes remind us that yesterday’s pop song is today’s standard.

Standards And Other Songs: Moon Dance; The Best Thing For You Is Me; Anytime; Lovely Day; Hard Times; Blame It On My Youth; You Are My Lady; From This Moment On; Passion Fruit; Pensitiva; More Than You Know; Somewhere In The Night. (62:56)
Personnel: Ron Jackson, seven-string guitar; Nathan Brown, bass; Darrell Green, drums.