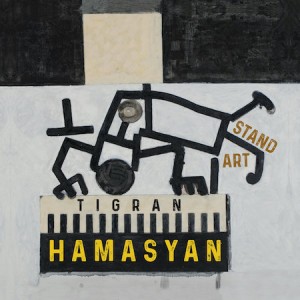 In his first album of standards, Tigran Hamasyan is doing what this music was meant to do: reveal the ways different musicians hear and respond to our common possession and inheritance. Perhaps this was an album that had been long-awaited, but there is nothing rushed or restless about these interpretations.

We find Hamasyan playing in registers that remind us that this music is as vibrant as ever, that it is as generative as when it was first brought into the vocabularies of the artists who made them standards. And so it is refreshing. And it also easy, not in the sense that it lacks complexity—the one departure from the standards, “Invasion During An Operetta,” demonstrates that.

Yet it is music that gives one a sense of ease, a fluidity that settles one’s soul. Hamasyan’s engagement with the tradition is backed by bassist Matt Brewer and drummer Justin Brown, and special guests Mark Turner, Joshua Redman and Ambrose Akinmusire, all stalwarts of the scene, who narrate this feeling, whose care for these classic tunes manifests beautifully.

StandArt: De-Dah; I Didn’t Know What Time It Was; All The Things You Are; Big Foot; When A Woman Loves A Man; Softly, As In A Morning Sunrise; I Should Care; Invasion During An Operetta; Laura. (47:48)
Personnel: Tigran Hamasyan, piano; Matt Brewer, bass; Justin Brown, drums; Ambrose Akinmusire, trumpet (7, 8); Mark Turner (3); Joshua Redman (4), saxophones.