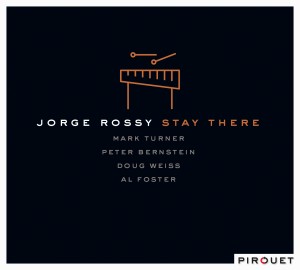 Barcelona native Jorge Rossy continues his fascinating career arc
with both his fourth album as
a leader and his recorded debut
on vibraphone. His Rossy Vibes
Quintet consists of three close
peers. Rossy has known tenor saxophonist Mark Turner, guitarist Peter Bernstein and double bassist Doug Weiss for over 25 years. Veteran drummer Al Foster, with whom Weiss has been playing since 1995, provides a solid foundation for this atypical instrumentation.

Stay There features seven Rossy originals plus Foster’s charming “Pauletta” (with its sinuous saxophone line), Guillermo Klein’s flowing “Artesano” (dedicated to the bandleader by the Argentine pianist and composer) and “The Newcomer,” a relaxed piece penned by pianist Mercedes Rossy, Jorge’s late sister.

“W Waltz” boasts an extended solo that showcases Rossy’s clean percussion style and Bernstein’s keen comping approach before the guitarist embarks on a thoughtful exploration of his own. The title track closes out the album with a perhaps wistful grace of five veteran players who are happily and wholly at ease with one another.