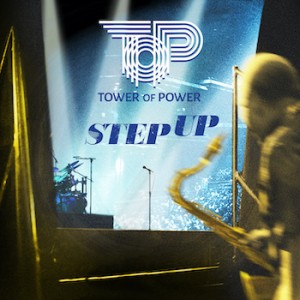 Step Up opens with “East Bay! All The Way!,” a minute-long horn-heavy affirmation of exactly where Tower of Power is coming from; the group has been proudly representing the Oakland area since its 1970 debut, East Bay Grease.

Since then, its calling card has been the famed Tower of Power horn section, a collective featured on recordings by Santana, Al Kooper and dozens more. Here, the section supplies a full, sweet brassy bite that’s all too often missing in contemporary soul music. Saxophonist/composer Emilio Castillo, baritone saxophonist/lyricist Stephen “Doc” Kupka and drummer David Garibaldi each have been with the group since that very first album, contributing to a sense that the heart of the outfit has remained unchanged during the ensuing years. Tracks like “Addicted To You” and “Sleeping With You Baby” are hooky, horn-drenched grooves that hearken back to classic ToP love songs like “So Very Hard To Go.”

Step Up is chock full of the romantic tunes like these, but it also features tracks that speak to current social and political situations (another hallmark of the band’s catalog). “Any Excuse Will Do” expressly decries the divisive culture of finger-pointing just as “Only So Much Oil In The Ground” criticized cavalier consumption during the 1973 oil crisis. Both feature lyrics by Kupka, and clearly, he still has a lot to say, again proving that a stone jam also can provide listeners food for thought.