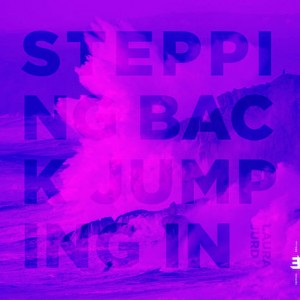 It’s all atmosphere that opens “I Am The Spring, You Are The Earth,” the nine-minute centerpiece of London-based trumpeter Laura Jurd’s new disc, Stepping Back, Jumping In.

The Ligeti Quartet executes her composition with airy ambience, sawing those strings to sinister effect. It’s a disquieting moment amid an album-length pastiche of jazz, chamber music and something akin to a film score. “I Am The Spring” drifts on for a bit, augmented by Rob Luft’s slide guitar and Anja Lauvdal’s mounting synth drone. Jurd’s horn doesn’t factor into the mix until about five minutes in, contributing a new layer of tension among the other brass as the tune ambles toward an experimental denouement.

A few tracks on, “Companion Species” more closely approximates Dinosaur—a collaborative ensemble Jurd performs in—splicing in a dash of funk and some jazzier tendencies. She doesn’t take the spotlight frequently, and here Jurd’s solo is pretty short. But she trills, emotes and delights so effectively in the quiet moments provided by her writing that it’s tough not to want the feature to stretch on for a while.

Stepping Back, Jumping In isn’t the composer’s first tangle with strings, but it marks further development in Jurd’s voice, one that cleverly weaves together new-music exceptionalism, experimental bravura and occasional jazz feels.