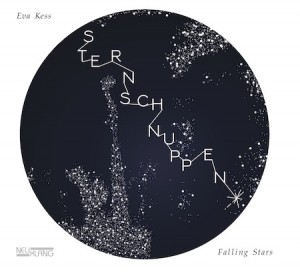 How to be present without being dominant? Eva Kess’ bass is almost the first thing one hears on “Ikigai,” the opening track of Sternschnuppen: Falling Stars, rich-toned and resonant, but blending immediately with the violins and never hogging the foreground. The feel is more Charlie Haden, less Ray Brown.

What matters here are the compositions, which fall together in a thoroughly satisfying whole, even though there is no linking thematic matter. There’s a temptation to describe any such record as a “suite,” when it is no such thing. The dance element is not missing: It surfaces on “Porto Alegre,” but it’s set aside entirely on the rhythmically complex “Experimental Dreaming” and the Brubeck-like “Penta Piece.”

The remarkable thing about Kess’ whole conception—which embraces her writing, playing and her sense of ensemble—is how confidently she embraces both the ethereal and the strongly physical, often in the same piece. “The Subsequent Use Of Yesteryear And Futurity” is basically a strings-only conception, which perversely serves as a reminder that the piano here is not the usual rhythm-section harmonic anchor, but another voice among many.

The late Kenny Wheeler, whose work Kess’ compositions often resemble, described his morning routine thus: “Get up, don’t shave, play Bach.” It sounds as if Kess spends a lot of time playing Bach; her counterpoint is simply stunning. It’s an old-fashioned skill, but it remains fundamental and it’s absolutely at the root of this beautiful and all-to-brief album.