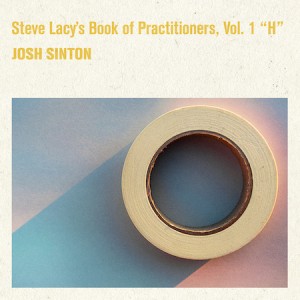 Josh Sinton shares 20 years of “findings” on the baritone saxophone with the release of Steve Lacy’s Book Of Practitioners, Vol. 1 “H,” a solo recording of the late soprano saxophone master’s advanced etudes performed on the big pipe. Sinton extends Lacy’s intended use of the etudes as practice and study material to create an album that explores the outer reaches of what is possible on this flexible and complex instrument, which has long been a staple of both traditional and experimental jazz ensembles. In Sinton’s view, the ever-more-ubiquitous bari remains ripe for experimentation and under-explored in the vast realm of solo saxophone works, and he shows unwavering enthusiasm for new ideas on Steve Lacy’s Book Of Practitioners, Vol. 1 “H.” Each of the six etudes here follows a set format that provides ample room for Sinton to build nuggets of discovery into fully developed improvisations. Highlights include “Hubris,” with its staccato outbursts and r&b references; the minor-key “Hallmark,” where an extended meditation turns into a two-way internal dialog; and the all-organic centerpiece “Hustles,” which exhausts a huge range of sonic possibilities and abstractions in its profound comprehensiveness. This album is a heavy package that will appeal to serious players, deep listeners and fans of art created in absolute earnest. Sinton is on a roll this year, starting with the June release of Adumbrations, a free and lyrical documentation of the long friendship between Sinton, pianist Jed Wilson and drummer Tony Falco (who have known each other since their student days at New England Conservatory), followed by this first volume of Lacy’s etudes, and concluding with a late-October release by Sinton’s Predicate Quartet (with trumpeter Jonathan Finlayson, cellist Christopher Hoffman and drummer Tom Rainey) titled 4 freedoms, which was funded by a grant from the Jazz Coalition to explore socially conscious themes.