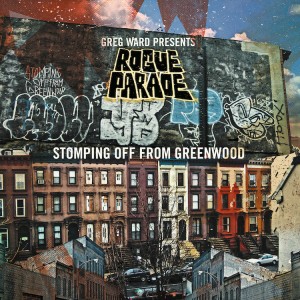 Saxophonist Greg Ward turns in a program that’s as eclectic as it is electric with Stomping Off From Greenwood, a recording that features the endlessly sturdy Chicago rhythm duo of bassist Matt Ulery and drummer Quin Kirchner.

Calming bits of nuanced playing (“Pitch Black”) counterbalance some of the blustery, aggressive portions of the disc, portraying Ward’s penchant for an all-encompassing take on the genre as the band moves between tradition and the vaguely funky influences that crop up sporadically throughout the album. On the leadoff track, “Metropolis,” the band shifts from a quick-step opening gambit infused with Ward’s assured line, twined with guitar, into a lunging breakdown, something that would be suited to burly rock acts dealing with tension and release. The band swings hard a few tracks later on “The Contender,” and takes on an experimental sheen for the ruminative “The Fourth Reverie.” Rhythm and melody are replaced by Ward’s sporadic squeaks, his ensemble slowly building a musical pyre for the bandleader to burn down moments later.

Though now ensconced in the New York scene, Ward’s latest offering—suffused with not just players from, but also the exploratory fervor of Chicago’s top-tier performers—portends future successes, no matter his stomping grounds.