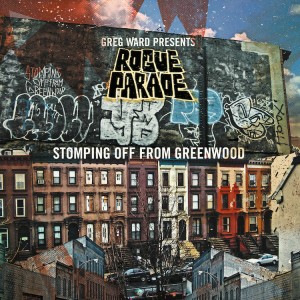 Once a sideman to Lupe Fiasco, Mike Reed and others, saxophonist Greg Ward has emerged from the shadows with impressive fanfare. And his most recent release is an energized ode to the perils and joys of urbania: Stomping Off From Greenwood, an autobiographical account of a musician straddling the musical hotbeds of New York and Chicago. Stomping is everything a listener could ask for in a recording—and in a city. It’s the perfect musical storm of the systemic, the mechanical and the human, all invigorated by its population of five.

Stomping Off From Greenwood conjures plenty of familiar city sights and sounds, ironically because its arrangements are anything but. Dual six-stringers Matt Gold and Dave Miller are a wonder team of accompanists, providing foundation and pointed control when working in tandem (“Metropolis”), conjuring back-alley suspense with contrapuntal, ambient noise-rock (“The Fourth Reverie”), and even supplying extra muscle to Ward’s own swing. Always the spacious player, bassist Matt Ulery keeps the low end wide-open and comfortably in the pocket alongside percussionist Quin Kirchner. And all the while, Ward adds liquid soul and fluidity to the rapidfire movements of the city—“Excerpt 1” and “Let Him Live” being particularly notable.

Stomping is not all hard-edged grit, though, and eventually makes an ambient shift. The musicians wind down gracefully on tracks like “Stardust” and “Sundown,” with room to wander, reflect and channel the raw, organic energy of a city (or cities) at rest.