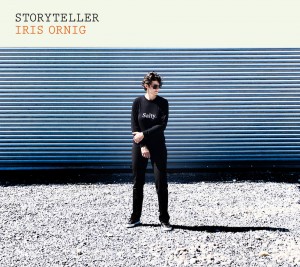 For about 15 years, bassist and composer Iris Ornig has been an unsung hero of New York jazz, having played with guitarist Kurt Rosenwinkel, trumpeter Ambrose Akinmusire and drummer Allison Miller, among others.

On any given night in Manhattan, Ornig can be found at some local jazz haunt, leading her trio or quartet with meaty, euphoric aplomb, breezily sprinting through swinging tunes and unconventional covers of Michael Jackson or Björk. With a deep-seated pliable nature, Ornig somehow has continued to fly under the radar. Storyteller, her third set as leader, has the potential to change that.

Sporting a radically different lineup than on previous recordings, Ornig seemingly has found her perfect complements in tenor saxophonist Jeremy Powell, trumpeter Jonathan Powell, pianist Addison Frei and drummer Allan Mednard for a 10-song set that reveals the most simpatico of vibes. Ornig is, of course, both rhythmic heartbeat and anchor, but on Storyteller she shares the spotlight as each player moves from star-making solo turns to high-spirited interplay. Ornig’s open compositions possess an airy and warm touch, always gliding forward, even with dizzying chord structures, as evidenced by the propulsive opening track “25,” “Harrison” and the fiery, Latin-tinged “Salty.”