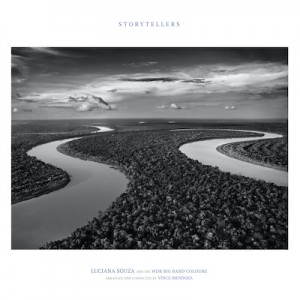 Big band singers were such a ubiquitous fixture in jazz at one time that the model seemed set in stone. Arrangers like Gil Evans, Bob Brookmeyer and Maria Schneider brought new shadings and textures to the instrumentation, but the perky or heartbroken role vocalists played stayed locked in the past.

Vince Mendoza is one of those arrangers who has introduced new, subtle voicings, and Luciana Souza is one of the few singers who has ably moved between singing with both symphonies and contemporary jazz orchestras. Given those credentials, it should be no surprise that combining them with the WDR Big Band Cologne—a frequent vehicle for Mendoza’s arranging—and a broad selection of Brazilian compositions would yield impressive results.

Souza’s vocals—sung either in Portuguese or wordlessly—are exceptionally well integrated with the band, to the extent that she sounds like a 22nd instrument on “Varanda.” Highly cinematic, the piece serves as the perfect introduction to a carefully crafted version of “Matita Perê,” Antônio Carlos Jobim’s sweeping tribute to his country’s ecology and the common man. Mendoza’s arrangement is multilayered, with a flawless tempo shift at its midpoint and an effective soprano solo by Johan Hörlen. But the primary strength of WDR is that it can execute both the buttery blends Mendoza wrote for a version of “Beatriz” and clear the decks for expressive solos. In addition, veteran drummer Hans Dekker has the lithe touch and supple feel to provide the ideal accompaniment for Storytellers.