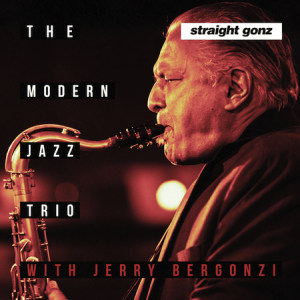 Tenor saxophonist Jerry Bergonzi’s earliest records as leader were influenced by his time with Dave Brubeck. Later, he went through a Coltrane phase. For years, though, he has sounded like no one but himself and, as such, rivals Dave Liebman as the best guest you can have on the stand.

He blows very freely, often with subliminal hints of a Latin rhythm, as on “Body And Soul,” now so hoary a tenor warhorse one usually reaches for the skip button. Amazingly, he finds new angles not just through the chords, but on the melody as well.

The MJT is an exceptionally talented Scandinavian unit, led by Carl Winther (son of the Jens Winther) and stoked with combined power and subtlety by Finnish-born Swedish migrant Johnny Åman and drummer Anders Mogensen, the most subtly musical drummer in Europe.

It makes for a very happy meeting. The venue was a Danish jazz club and presumably recorded pre-COVID. That’s the best way to catch Bergonzi, who can tighten up in a studio and overcook his ideas. With live bodies out front, he’s untouchable at the moment.